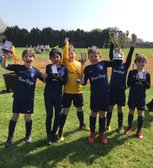 Under 9 blues off to a flying start in higher division

When we formed the club in May 2017 and managed to get four new teams established for the 2017/18 season our initial aim had been more than achieved.

Now for the fun bit...the football.

As a club we place a high emphasis on individual player development and contributing to the wider life skills of all young people within our setup, performance before results always.

The expectation for our first season was that the players would enjoy football in a safe environment and improve individually through our coaching and guidance.

To have not only developed players in our first season but also been able to reach not one but two cup finals really was an outstanding achievement.

Our 2017/18 EEYFL cup winning u8s Blues unsurprisingly have been moved up several divisions as they start the 2018/19 season and tackle 7 a side football.

The team have most certainly carried on where they left off, 2 wins in 2 games against very strong opponents is a real statement of intent from these talented young players. Having scored 7 goals already and only conceded the one we predict more success for the u9s blues as the season progresses.

Wishing all the best to Trevor and the team.